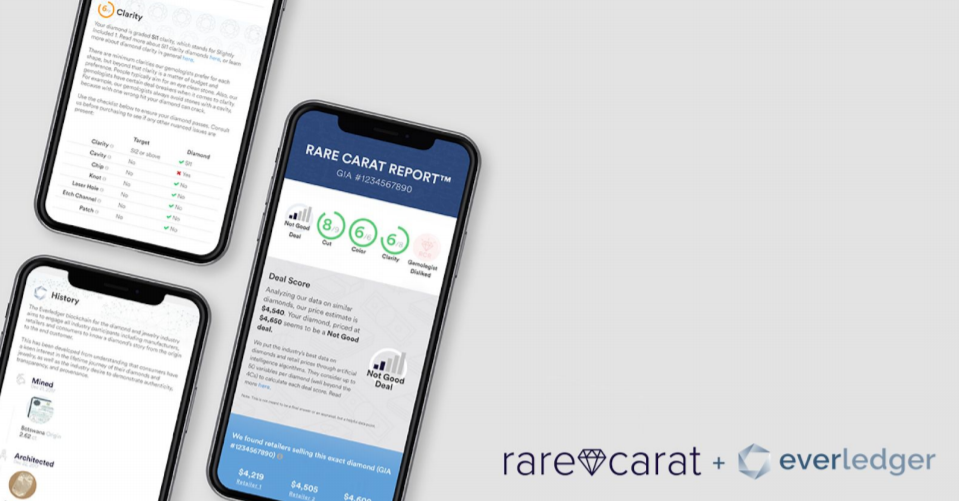 By James Bourne | January 13, 2021 | TechForge Media http://www.cloudcomputing-news.net/
Categories: Blockchain Applications, Enterprise, Partnerships, Supply Chain & Logistics,
James is editor in chief of TechForge Media, with a passion for how technologies influence business and several Mobile World Congress events under his belt. James has interviewed a variety of leading figures in his career, from former Mafia boss Michael Franzese, to Steve Wozniak, and Jean Michel Jarre. James can be found tweeting at @James_T_Bourne.

Rare Carat, a jewellery marketplace provider, and blockchain technology firm Everledger are teaming up to deliver greater transparency and sustainability information on diamonds in the former’s marketplace.

The companies noted the latest Everledger platform ‘specifically aids demand generation for retailers searching for diamonds based on their sustainability efforts, credentials and compliance standards’, as well as ‘matching suppliers who want to securely share this valuable data with individual retailers.’

‘Using the newest version of Everledger’s leading blockchain platform, Rare Carat customers will now be able to search for and purchase diamonds that have been tracked from mining, through manufacturing, all the way to sale’, the press materials breathlessly noted. ‘This ensures that the diamond being purchased is conflict-free and has been sourced in a sustainable manner.’

The two firms had previously partnered as far back as August 2018, to launch the Rare Carat Report. The report was aimed at consumers to be able to evaluate diamonds for sale anywhere. By entering a diamond’s certificate number, the report would return an assessement noting its price, strengths, and weaknesses. This is also by no means the only such project Everledger has undertaken; in August, the company teamed up with GIA and JD.com for diamond provenance ‘inter-chain collaboration.’

“Both retailers and customers directly benefit from having a permanent digital record of a diamond’s origin, characteristics and ownership, and this is particularly relevant to younger generations that the diamond industry is keen to attract, who put more weight into understanding the sustainability and ethics of a desirable item,” said Scott Austin, Everledger SVP Americas.

Among Everledger’s recent activities include an initiative with the University of Glasgow. The project looks to produce tamper-resistent bottle tags in order to track rare Scottish whiskies.