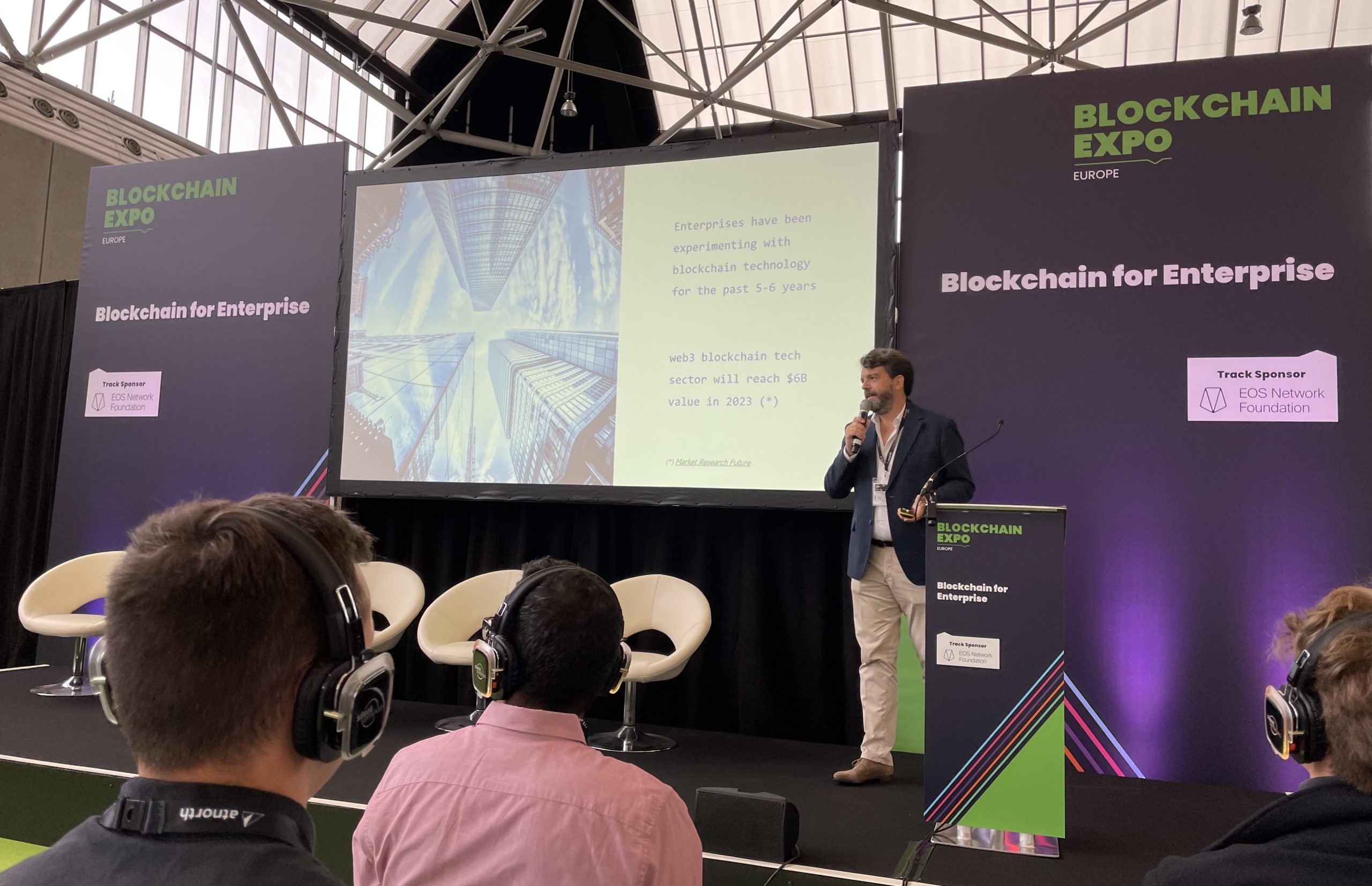 By Ryan Daws | September 20, 2022 | TechForge Media
Categories: Blockchain, Blockchain Applications, Blockchain Expo, Cryptocurrency, Digital Assets, Enterprise, Legislation & Government, NFT, Privacy & Identity, TECHEX,
Ryan is a senior editor at TechForge Media with over a decade of experience covering the latest technology and interviewing leading industry figures. He can often be sighted at tech conferences with a strong coffee in one hand and a laptop in the other. If it's geeky, he’s probably into it. Find him on Twitter (@Gadget_Ry) or Mastodon (@gadgetry@techhub.social)

A session at this year’s Blockchain Expo Europe highlighted that blockchain is reaching a stage of maturity that paves the way for enterprise adoption.

The session was presented by Pedro Lopez-Belmonte, Senior Manager of Web3 and Technology Innovation at Richemont, on day one of Europe’s leading blockchain conference.

One of the first charts presented during the session was Gartner’s hype cycle, which shows blockchain platforms now leaving the trough of disillusionment and entering the slope of enlightenment:

This area of the cycle is where emerging technologies leave behind their initial hype and subsequent disappointment, and have now reached a stage of maturity where expectations are realistic and more widespread adoption often follows.

Gartner are not the only analysts that believe that blockchain is maturing. According to Market Research Future, the blockchain industry will reach $6.7 billion next year.

“The technology has already had a decent level of maturity. We can see that it has proven its value,” says Lopez-Belmonte. “Still, we are far away from reaching mainstream adoption and taking this technology and embedding it in our stacks and daily operations as cloud.etc”.

There are three key areas that are preventing mainstream adoption in Lopez-Belmonte’s view:

There are enterprise-focused blockchains like Hedera Hashgraph that still offer a degree of decentralisation, but prioritise scalability and security. Decentralisation proponents argue such blockchains do not differ enough from centralised alternatives, but many enterprises will see it as the best compromise.

However, Lopez-Belmonte believes that an enterprise would still often have to give two elements away — and that’s a barrier to adoption.

There are also lingering misconceptions around the energy consumption of blockchains that need to be addressed. Limited energy supplies in recent months have only amplified existing concerns around climate change and few enterprises want to be linked to anything that worsens those problems.

Ethereum, the largest smart contract platform, switched to Proof-of-Stake this month following an incredible feat of engineering called “The Merge”. Moving away from Proof-of-Work reduced Ethereum’s energy-consumption by around 99.98 percent and should improve decentralisation long-term by eliminating the need for mining rigs.

As highlighted by Lopez-Belmonte, Bitcoin is the only major cryptocurrency that still uses the energy-intensive Proof-of-Work consensus. There are growing calls for Proof-of-Work mining to be banned in many countries due to the environmental impact, something that would further impact Bitcoin’s already questionable level of decentralisation.

While Proof-of-Stake chains are showing that Bitcoin doesn’t need to be consuming so much energy, there is a misconception that it uses more than other technologies. For example, Lopez-Belmonte highlights this recent graphic that shows Bitcoin consumes far less energy than YouTube, banking, and gold mining:

The second major challenge in Lopez-Belmonte’s view is compliance.

Despite plenty of talk, there is yet to be much regulatory certainty around blockchain and Web3. This is hampering innovation and enterprises won’t want to invest heavily until they receive greater certainty.

“Even if many governments are looking into it and pouring money into research, there is still a lack of clear regulatory frameworks,” explains Lopez-Belmonte.

Many governments, especially the UK, have publicly said that they want to become hubs for crypto, Web3, and general blockchain innovation. However, much of what we’ve seen so far has been counterproductive to those efforts.

Lopez-Belmonte believes that upcoming European regulations will be a good thing for the industry but largely thinks that more clarity is needed globally.

“There are some locations with more mature regulations such as Switzerland, Singapore — but, in general, we can say that we don’t have clear regulations.”

The final challenge Lopez-Belmonte highlights is around implementation.

One big question is always: public or private? Lopez-Belmonte argues that most of the data is going to be stored off-chain anyway and there will be just on-chain certification for the data.

Lopez-Belmonte also says there’s a need for use cases that have actual value.

“If you were around in 2017/18, you will remember there were a lot of futuristic statements and there was hype. There was a lot of money put into PoCs (Proof of Concepts) and pilots just for the sake of having a blockchain,” explains Lopez-Belmonte.

“Clearly, any project needs to have a purpose.”

NFTs (Non-Fungible Tokens) are currently associated with images that are popular but have little utility beyond bragging rights and value speculation. However, longer term they could have far more utility in areas like digitalising land deeds.

“In my opinion, NFTs for the enterprise will be very, very important. In the enterprise context, we mostly work with a lot of serialised, unique data” says Lopez-Belmonte.

“Everything that is serialised, that is unique, is subject to get attached to a NFT — and with that we can improve the business process. Doesn’t matter if it’s B2B or B2C, we can bring a lot of efficiency and automation.”

“NFTs for the enterprise are going to have a great impact on our interactions or corporate relationships in general.”

Then there’s the metaverse, which is already closely-linked with blockchain technologies. NFTs are already providing the rights to digital items in virtual worlds and so on. Many of the companies recently selected by Disney for their 2022 Accelerator were blockchain, metaverse, and NFT startups.

“We have a lot of companies jumping into it,” explains Lopez-Belmonte. “They want to engage with new customers. The gamers of today are the customers of tomorrow.”

More generally, numerous emerging technologies are going hand-in-hand with blockchain such as the IoT and AI. Blockchains are opening up doors that were previously closed.

“Blockchain is solving a lot of things right now, a lot of existing business processes or problems that we couldn’t [previously] solve,” comments Lopez-Belmonte. “Use cases with emerging technologies combined with blockchain are going to be the next big things.”

Over the course of the next year, Lopez-Belmonte says that people should be keeping an eye on three key things.

The first is blockchain connectors:

Lopez-Belmonte is keen on plugins that enable customers or other companies to log-in using a wallet instead of traditional web 2.0 means.

The second major thing that Lopez-Belmonte believes people should be keeping an eye on is decentralised identity.

“It is the new CRM because, especially in a B2C context, it enables companies to establish a new kind of relationship with customers in an anonymous way,” explains Lopez-Belmonte.

“We are all thinking about situations like Cambridge Analytica with Facebook, we still don’t know what they’re doing with customer data.”

Blockchain naming systems have also exploded over the past year, enabling aliases like TechForge.eth instead of some long and forgettable alphanumeric code.

The final point Lopez-Belmonte makes on what to look out for over the next year regards China.

China has provided its own, arguably far more restrictive, vision for blockchain. For example, digital collectibles are not transferable so people cannot speculate on their value.

Lopez-Belmonte points to Beijing’s support for the BSN (Blockchain-based Service Network) which features their own public blockchain network but without crypto. They’re also setting up the “Spartan network” which is only available outside of China and aims to get Western companies involved with using their technologies.

The session was just one of many interesting talks during day one of Blockchain Expo Europe. You can find out more about upcoming events in the global series below.